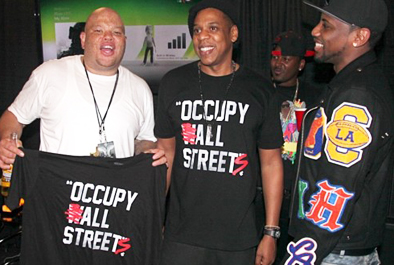 Whats was really going on at Occupy? With murders and rapes, they finally manage to clear out Zuccotti park of the occupiers this week .

Last week, a Rocawear “Occupy All Streets” tshirt drew criticism. Days after the $22 tees debuted with no proceeds to benefit the protest movement the shirts vanished from the online catalog — but on Monday they reappeared. Who nows what the people at the top of the JayZ food chain are thinking. Considering that their spokesperson Mr. JayZ stated that he would be willing to pay more taxes to help get America out of the hole it dug, taking a page from Warren Buffett a 1%. BUT who knows if Jay Z has even heard about what’s going on with the tshirt. I bet he’s dealing with bigger fish at the moment.

Take for example the fact that he isn’t part of that 1%., he’s busy trying to make that money because a baby’s coming. Buffet is worth $39 billion, while JayZ is worth $450 million. Don’t get me wrong, JayZ is banking! But like all the other 99% (including JayZ) they owe someone.That top 1%, they don’t owe squat.

And all the media did was blast the negatives of a movement so unimaginable, that you had to go there and talk with the people there to see for your self. What you would have seen was the manifestation of 87 groups with volunteer members ranging from 5 members to 254 members. Did I mention they volunteer, did I mention this is only New York. Want to see live how many groups are “Occupying”, go to http://www.occupystreams.org/ and see all the places globally that are doing the same thing.

One group at NYC Occupy is The People’s Library. The library provided free, open and unrestricted access to a collection of books, magazines, newspapers, ‘zines, pamphlets and other materials that have been donated, collected, gathered and discovered.

The GARDENING group concentrated on ill-used land to support communities and natural ecosystems. With online videos of how easy it is to grow winter greens and beets you’ll learn how to plant right in a parks flower bed..

The Free Health Care group had a 24-hour medical center housed in a military tent, complete with wooden floors and a rotating staff of volunteer medical professionals. NOT to mention Veterinarians that show up to Zuccotti once a week to offer free checkups to the many dogs that have started living at the park.

I don’t know about you but if the above three items occupied my streets, I would definitely have a pep in my step day to day. But not of these occupy majority of the worlds streets. In the United States, wealth is highly concentrated in a relatively few hands. As of 2007, the top 1% of households (the upper class) owned 34.6% of all privately held wealth, and the next 19% (the managerial, professional, and small business stratum) had 50.5%, which means that just 20% of the people owned a remarkable 85%, leaving only 15% of the wealth for the bottom 80% (wage and salary workers).

Will the occupy wall street last with no leader and no Zuccotti Park? Well maybe its time we are all “leaders”. One by one taking control of our realities from the amount of plastic we consume, the skewed understanding of “real food”, the brainwashing of media and the illusion of being a greyhound chasing an electric artificial hare called “money”. Oh how those 1% love that game!

Truth be told. We’ve had many amazing leaders in the past. And what happens to them is that they get eliminated. In the words of Bob Marley, to all those that “THINK” they are 1%’s, “You ain’t gonna miss your water until your well runs dry; No matter how you treat him, the man will never be satisfied”

Even though a bit “fooled” (like alot of Americans), JayZ’s tshirt was actually right, Time to Occupy All Streets!